A 15mm bridge to far

This week I have been working on some of the drop on terrain items for the board which includes street lights and power line towers.   Tonight I am continuing work on the bridge for the 15mm terrain layout, it was kindly constructed by a friend Richard this last weekend during our weekly workshop. It now needs a second base spray coat and airbrushing on the larger areas.
It is made from a  Magister Militum 15mm Arnhem bridge - link here: http://www.navigatorminiatures.com/product.asp?P_ID=10291&strPageHistory=search&strKeywords=arnhem&numPageStartPosition=1&strSearchCriteria=all&PT_ID=all
I have added to it by laying a track of S6engineering.co.uk road sections to the centre of the board, which links up with the same road sections on the actual terrain board. I have also added some textured plasticard to it for the walk ways and strips of styrene rod to add detail.
For those interested in the board from a review perspective I would say that it is a little expensive for what you get. The main two base panels are basically the same size/proportions as foam core card. So you could make them from foam core as a project to save on the resin/boards.  The sides/railings were a little miss-cast so require some tidy up, with the main raised support structure being relatively small in comparison to the larger base boards.  The piers are sturdy blocks, with limited detail but certainly do the job as large heavy chunks of cast resin.
I think I am being a bit harsh on it but it was the only nearly modern 15mm scaled bridge I could find for the job.  It has enough "gaming space" on it to allow for a firefight on the bridge and the side sections will allow pedestrian/squad access. So I can imagine some interesting scenes with firefights across it.  I think Magister obviously need to take some time in casting all of the components which no doubt adds to the cost in addition to the amount of resin used.    I will take some pictures soon to share. 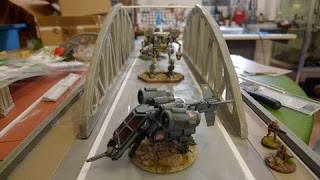 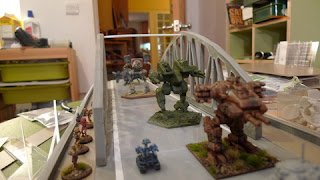 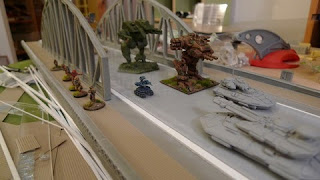 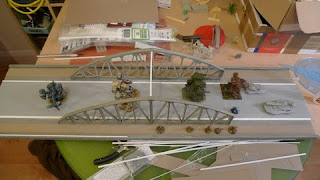 Back to the rules...   They are getting close to needing a final proof and I will be able to issue them for proofing in the next 3 weeks.   I expect the first release to be ready for Salute as a PDF download which will be supporting the full production of a print release.
In terms of a strategy and support for the community and ideas the first PDF release will still be something that can be influenced and adjusted before a print copy arrives. So more feedback on the points builders and gaming experience will be channelled back into it.
There will be an article out very soon in the www.thebattlespace.com on-line magazine with more detail about how I developed the game.  I will share details when it is released.
Posted by inrepose at 11:10