15mm Down Below SCI-FI Terrain

I have had several requests for more information about the Ainsty Casting Models "Down Below" Terrain.  It was a terrain layout specifically designed for 15mm gaming and I managed to put a demo game on at the last Bifrost SCI-FI wargames show back in 2005. 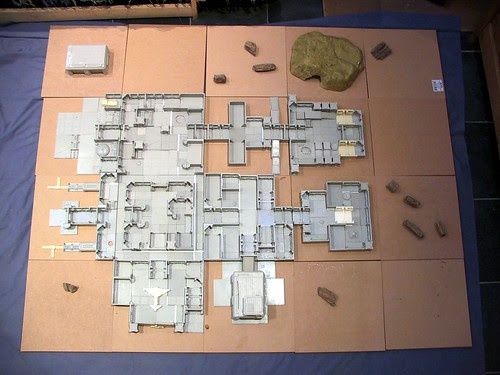 I bought the terrain back in 2004 from Mike Brooks of Ainsty. Mike sadly died shortly after he sold his business to Old Crow models and Jez continued to produce the same ranges at Old Crow before they were finally transferred to Andy who is now a dedicated business for Ainsty Castings. The range is called "Down Below" and is ideal for 15mm because the walls are lower and more to scale with the smaller 15mm sci-fi miniatures. Details can be found on the Ainsty Casting web site here: Ainsty Castings UK

Robin Hill was the master mould designer for the vast majority of the Ainsty range and he gave me the following advice when I was starting this project.

Ainsty (now Old Crow) has been using 300mm (a "metric foot") square pieces of (whatever the metric equivalent of 1/4") MDF (Fibre board) to mount the terrain pieces. All of the Ainsty terrain pieces are designed to be rearranged as required, but if you want a permanent layout, the 300mm square boards give you a decent area to work with. Note that all of the modular scenery is in multiples of 30mm, and any floor plate system is compatible with all of the others, so if you do prefer one floor pattern to another you can use it with other pieces with no problems. And if you use double-sided tape to hold them down, they're semi-permanent and can be rearrange when you get tired of them.
The wooden boards are from a local DIY superstore (B&Q, I think) and they cut the MDF for him - this means it's square, to repeated dimensions and has vertical cuts through the board. Because of a very slight shrinkage in the castings, there will be a slight gap at the edges of the board - Mike adds a bit of Plastruct girder or piping to cover the gap.
Be sure to check out the accessories - I tried to make all of the crates, boxes, stacks of pipes, etc. scale non-specific, so that they could be used for 15mm, 25mm or 28mm. The pipeline stuff would also work for 15mm, though you might have to lose the stair pieces and replace them with Plastruct ladders. Alternatively, let me know if you have any specific accessory requirements and I'll see if I can make them up to add to the range.
Robin Hill (email from 2004)

This was the advice from the man who created the moulds, so I followed his instructions and had my MDF boards cut to the 30x30cm. I wanted a permanent layout, so I bought "No More Nails" glue in a tube from my local DIY store, which takes 10 minutes or so to set, so you can move the resin pieces around to get the perfect fit before they set hard into position.

I also bought stacks of Plastruct "PlastiCard" strips in various sizes to cover up on the shrinkage you get during the mould making process.

The fun part was building the layout. I bought a lot of the resin terrain from Old Crow models which enabled me to try different layouts on the boards before I glued them.  This is the best way to work and you may end up with the odd spare section - or need to buy more before you get the perfect layout. It is a bit like laying out the ultimate lego base.  I also bought the bases tiles from across the different sci-fi ranges, not just Down Below because as Robin Hill noted, you can mix the tiles in from any of the ranges because they follow the same dimensions.

I also bought a couple of 15mm buildings which were in the Old Crow ranges which were placed outside of the main base section on boards of their own. Chunks of rock and sand were glued down around the base for texture and places for 15mm figures to gain cover. 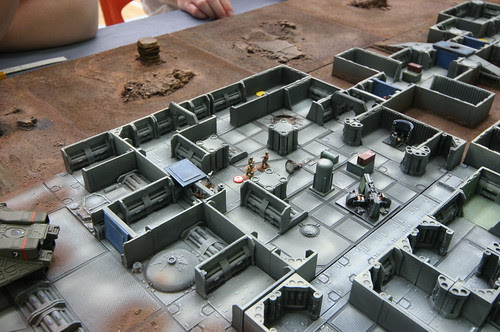 Notice the white plasticard, glued in to ensure the tiles fitted correctly. It was a fiddly job to get them fitted.

I wanted to "Air Lock" seal the layout, for realsim I did not want any open sides to the layout, all areas needed doors and bulkheads to enable the base to look like it could be sealed up.  This took a little more time and an extra purchase of components was required before I was settled on the final layout.  In total I spent about £230 on the full layout.  This included MDF boards, the resin, paints, plasticard and glues.  The resin terrain alone was around £140 of the total cost.

This is a large layout though and you could get started with a starter set for a couple of rooms. I also placed all of the doors in the centre of the boards. This allowed me to use the layout "modular" style, because I could change the configuration and board positions without worrying that a door would be in the wrong place. It provides me enough flexibility to pick and choose the setting or go for the full original design.

I airbrushed the layout when finished and spent a long time detailing with ink washes in the panel lines within the base.  I actually now want to re-visit it and add an extra "Super Detail" level to the base - so if I find the time in amongst the busy Grunts rules project I will get some more close up photos and share them.

I would advise using an airbrush if you are going for a large layout like this one. It really does save time and you get a more consistant result. You can also still add detail after you airbrush with shading and dry brushing. 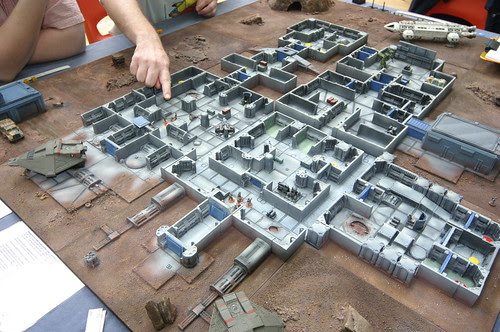 Door sections are availible from Old Crow, they are slide out doors which can form a nice airlock if layed out correctly. You can see next to the red dot in the photo below, that there are a pair of columns which form the door section. The doors then slide into this slot, which is a neat touch.  I also made a set of my own plasticard doors, to lean up against other areas in the layout. They are the thinner ones you can see in the painted final photos.

Doors are very important for game play, if you have ever played space hulk, you will understand how aliens find handles difficult. This can allow for some interesting creative scenarios where doors can be automated, locked out or blasted open if required.

There is also a youtube video game report with the terrain featured here:
http://www.youtube.com/user/trybeinganihilist?feature=mhum#p/u/0/i63hPqiX3Xo 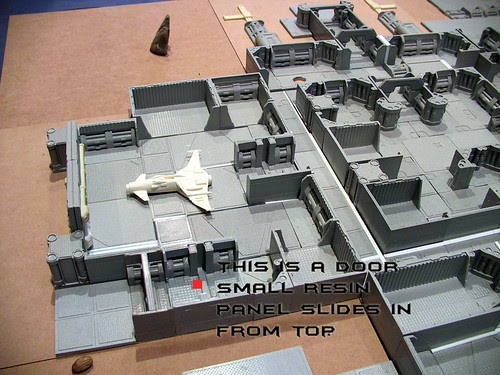 I almost forgot to mention a very important detail! Washing up liquid!  To get these sections ready for paint, I washed every single section of resin in a big "washing up" session before I started gluing it onto the board.  Use warm soapy water, rince and allow to dry. :)

The Gruntz SCI-FI rules which support gaming on this type of terrain are now available from wargames vault: http://wwe.wargamevault.com/product_info.php?products_id=92879&language=pt
Posted by inrepose at 11:18