I had a fun game of Full Thrust from GZG at the local club on Friday.  I am still amazed at how satisfying it is to play Full Thrust, after many years my old fleet still feels fresh to play and involves some in depth tactical play. Sadly my great tactical ineptitude kicked in and I moved my missile firing vessels in far to closely which, presenting big easy targets for the NAC.  I had the FSE (Federal Stats Europa) fleet with some additional models from Zandris IV and Ninja Magic.  I simply did not have enough in FSE models to be able to match Steve's "New Anglian Confederation" (NAC) fleet so I had to drag out some additional models from my collection.

For those interested, the game Gruntz was influenced by Full Thrust and the damage tracks and critical process was an inspiration for how I built the damage system in Gruntz. 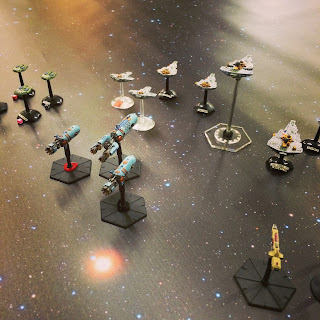 On my left flank I sent in a group of four Sub-Munition pack Hydra Class Destroyers which I had stated up as larger ships than the model would normally dictate. This was not really fair on Steve because he thought they were smaller vessels than I was representing with the small models. However I had limited models to use so they were the only thing close to size I could use.  It is worth discussing sizes with your opponent to avoid a surprise when a tiny approaching ship is actually supposed to be a carrier!

Here is the Hydra class (represented by the small green group of 4 ships on the top left of the above photo).  Image from the http://fullthrust.star-ranger.com/FSEstats.htm web site where I pull most of my stats from for the game.  I drop them into a doc and print them.

You can see the three submunition packs on the ship design (circle with black filled triangle on top). They are powerful one use only weapons, best used at a range of under 6" for the most devastating close range damage.  After using the one shot submunition packs,  the ships then fall back to using just beam weapons which are the circles with a two Class1 and one Class2 in the front arc only. Class1 beam weapons are the weakest with a range limit of 12". Class2 have 24" range. 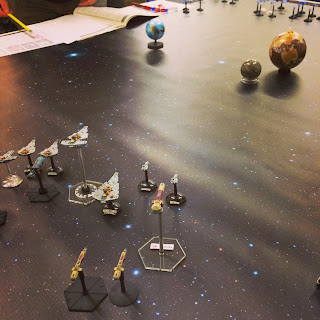 Early game my main FSE fleet splits. The moon and planet models provide a block to line of sight and I decide to split my forces. This is a mistake in the end round or two because I simply can't bring them to bear against the NAC fleet because they are too far from the main battle. 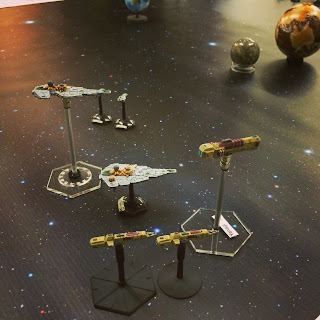 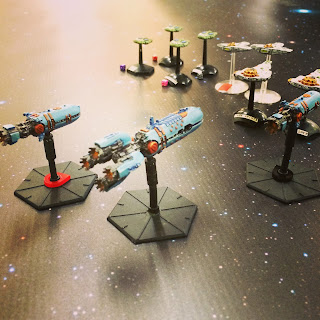 Ninja Magic ships. This model in the foreground was my main flagship for my fleet. You can see the small fighter launch bay along the edge of the ship.  I used the following Littorio Class Battledreadnought statistic card to represent it. You can see the single triangle which represents one flight of onboard fighters which I can launch.  The image in the top centre are two missile launchers and the attached magazine of single use missiles.  The FSE fleet is very missile heavy, tending to be lighter armoured than the British New Anglian Confederation and better at longer range with missile launchers. Something I forgot for this game and got in too close! 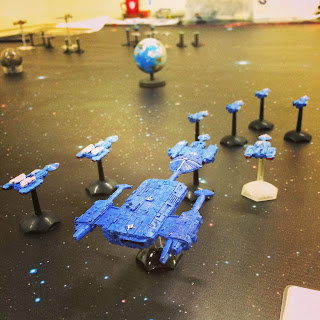 Steve's New Anglian Confed (NAC) fleet. These are from the earlier sculpt range from GZG. 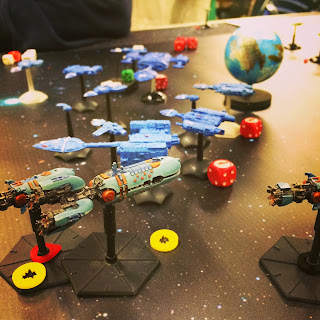 I used the yellow counters to note when a ship had fired each round. 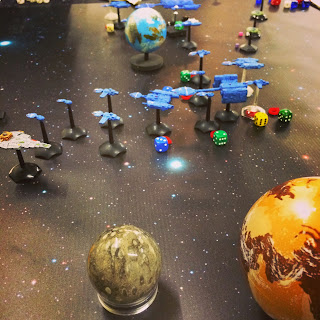 You can see my Lego Planet in use next to a sphere. These stone spheres are from a crystal shop on the Isle of Wight. The polished stone looks very moon like and you will find many of these stone orbs available on new age crystal web sites or ebay. These ones only cost me about £3 each and make easy drop on terrain. 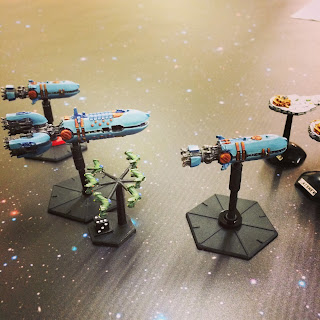 My single fighter group is launched from my main dreadnought. Fighters can move 12" a turn in any direction. 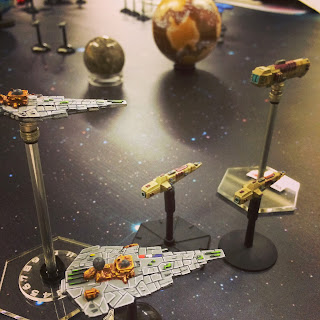 Close up on my older FSE fleet. 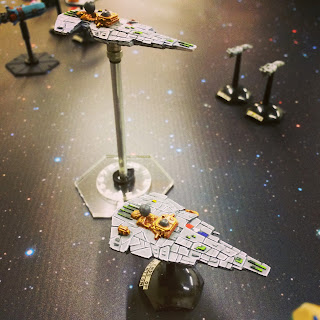 FSE heavies again. These earlier models from GZG tend to be smaller than the more recent re-sculpts on the GZG site. I must admit the newer ships do look nicer and I need to start investing in some of the new models again.