Valhalla in Farnborough was a great show for Gruntz.  It was busy enough for us to get a few games in but not overcrowded like a Salute where at the end of the day I am ragged and have lost my voice!

So I certainly hope to attend again next year. 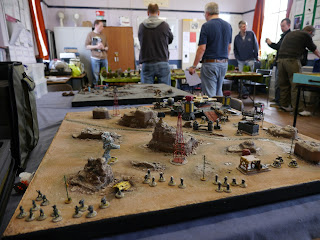 This is a video of the Gruntz game layout which we played through at the show.  Thanks to those that took the time to participate in a game. As usual the shielded Spider Droids were great fun to play and I also had some fun using the Protolene models from Critical Mass Games.


Here is a Star Wars terrain layout for the X-Wing board game.  This was another game played as a participation like Gruntz at the Valhalla show.  They have built a great little layout,  made various resin pieces to represent the Death Star with a trench system.  It certainly adds some atmosphere to the X-wing game.