Continued work on the 15mm VTOL

A quick update on last nights continued painting.  With the base coat completed with airbrushing over the weekend the next phase is now detailing and weathering.

Taking a closer look at my base coat I decided that it was the sort of dark blue/black that you would find on a law enforcement type vehicle. So with that in mind I ended up adding decals and details that were in keeping with a police type vehicle rather than the original plan of going for a military stealth theme (like a black Apache helicopter). I added some spot green and red panels which were completed with three colour tones,  a base dark one followed by a medium tone and a highlight. I used the new GW paints for the lights and kept the highlighting bold rather than blending in. I used the same three tones of red as a rim to the engine intakes. 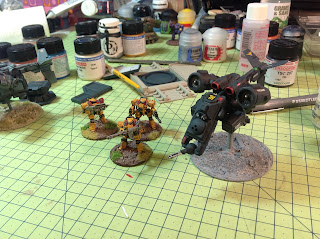 I then also went around the engine components and various other panels with a dark black from lifecolour called cockpit black.  It provided a nice additional shade to blend into the corners and bottom areas of the engine where the various cylinders and bars meet the fuselage.  It is not very easy to see the shade in the photos and the effect on the model is subtle.  I don't plan to highlight up the VTOL because I am after a flat stealth darker look which does not need a lot of highlighting.   I was impressed again at the quality, matte level and smoothness of the lifecolor paints. 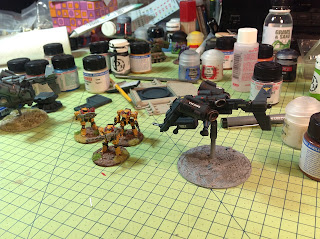 To avoid the figure looking like it has just been basecoated with no detail,  I selected a range of Bandai decals to use which provide a bold distraction to the eye.  Some of the Bandai decals are very tiny and only just visible on the VTOL, however they still add detail and improved the look of the bland dark base coat.  On the nose of the model I dropped two very tiny white text decals which looked satisfyingly sharp. Note that black text decals would not show up on a dark model like this. 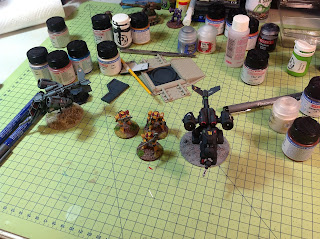 The very back of the exhausts on both the central engine and the thrusters was base coated black and then painted with the range of new GW silvers, gradually getting brighter toward the edge.   I was experimenting with thin coats of the new paints and was not 100% happy with the result.  So for now I went back over them with Smoke from Lifecolor. I also dropped some Oil from Lifecolor around the engine and exhausts which is an unusual paint and blobs on just like real oil, leaving a raised blob of paint. They now look like dirty blackened exhausts but could probably do with a small amount of highlighting and weathering to finish them. 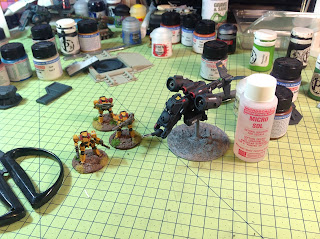 I cut the Bandai decals out and dropped them in water to let them slide off the cardboard, before applying them with Microsol which you can see in the photo above (small red text pot).   Bandai decals are very good quality and don't tear easily, so you can be rough and ready with them as you pull them from the water on a brush and lay them on the figure.  I let the water dry on the model for 10mins then applied a thin coat of MicroSol directly to the decal in place on the model. This then thins and softens the decal making it look more like a smooth flat painted detail on the figure.  Finally after about 3-4 coats of Microsol I will add some Microflat which is just a fine matt varnish which has the result of securing and flattening any remaining edges of the decal.   You could easily use your favourite brand of varnish thinned down rather than Microflat. I should have really painted a gloss smooth coat of varnish onto the areas where the decals are placed before I apply them because you get a better super flat look to the finished decal. However  that level of care and attention is only really needed if you are aiming for a showcase standard. This model is for wargaming and does not need to be perfect. 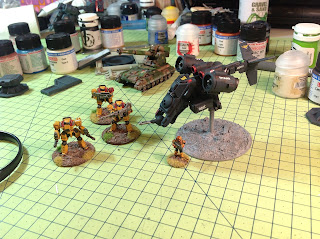 The next step is to hit it with weathering, some streaking around the engines, dust and wear and tear on the paint.  I also need to add colour and detail to the sensor bank on the robotic UAV control panel on the front.  This should be about another hours work plus about twenty minutes to finish the base.   It will finally get a matt spray from Testors dull-coat.

The other models in the photo are Art Crime Productions miniatures called Valkyrie walkers.
Posted by inrepose at 13:47