One of the things I wanted to achieve with Gruntz 15mm was the ability for players to create troops with different armour types to match the miniature and armour types.

This Arc fleet rifle is pretty much an average unit with a Guard (How hard it is to hit them) at 12 and Soak at 12 (Armour type). The higher these two statistics are the longer the unit will survive on the battlefield.  Gruntz have a standard unit size of 6 and only one damage point each, so once hit by incoming fire the higher Soak factor will provide better protection.

A soak of 12 is a representation of a squad with standard armour, the kind of light body armour, perhaps mostly focused on upper body regions and a helmet.  Soaks lower than 12 can cover civilian or militia style armours, perhaps 11 could be used for a post apocalyptic biker rebel with heavy leathers and 10 for a standard non armoured troop. 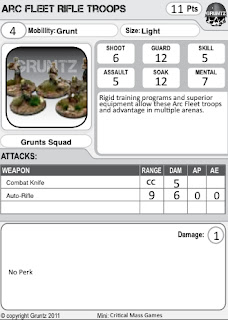 This profile below is a generic Gruntz squad but with a Power Armour levels of Soak at a factor of 14. With a 14 Soak the unit will be able to stand up against small arms fire at but will still take casualties but certainly at a lower rate than you would if the unit had standard infantry armour. 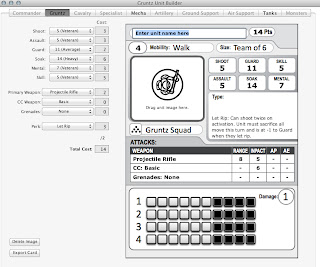 These are the GZG Kra'Vak Powered Armour troops and they have the Guard factor of 14 and two squad members with micro-missiles. 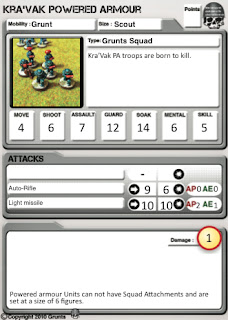 This sample below is of an infantry build with the Soak factor at 13. The factor of 13 is what I would normally use to represent a hardsuit type unit. They are not as tough as the Power Armour suits but they have more protection than a squad with standard body armour. 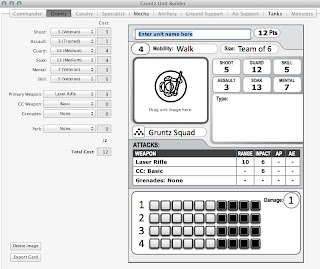