Today I finally split the Vehicle cards from "All other Profile Cards". It was a waste of space on the card having all the empty statistic box's for items like Mental skill which a vehicle does not use, so they have been removed.
I also re-designed the vehicle cards to include more room for the multiple weapon types on walkers and mecha which carry a varied payload. There are now 3 main weapon system slots which is enough to cover most situations for this release of Gruntz.  The fluff font size is also bigger on all cards for ease of reading.
Tohit has been renamed to "Guard" on the cards and the statistics adjusted slightly for the various vehicle classes. You now don't need to beat the Soak statistic to do damage just equal it. This was based on feedback from players that felt it was confusing to have to equal the "Tohit" (Now Guard stat) but then roll above the Soak statistic. It made more sense that it was "equal or greater than" in both cases and has been adjusted in the rules and on the card profiles.
Other feedback from players included multiple weapon firing. It seemed a bit crazy to have mecha bristling with wepaons but still be only able to fire one weapon per turn. You can now fire two weapon kinds per activation on a vehicle with the second weapon firing at -1 to the ranged attack roll. Like everything else in gruntz this rule will be looked at again but recent play tests have been more fun when you allow mecha and multi-weapon vehicles to use two weapons per activation.  On vehicles like the Kra'Vak strike skimmer you can now fire off some serious damage in a single activation, although as a vehicle it is lightly armoured compared to larger tanks, so making use of its mobility to strike at key enemy units is important.
Here is a sample of the new Kra'Vak Grav Tank card. A selection of the new cards are available for download in the Yahoo group. 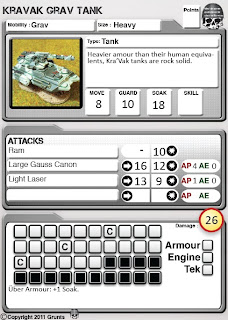 On an unrealated note I was in London this last week for a visit to the Barbican centre and passed some interesting looking clusters of buildings which looked very SCI-FI bunker. This particular Costa coffee sold the latest in nuke-battery laser carbines and de-caf latte's. 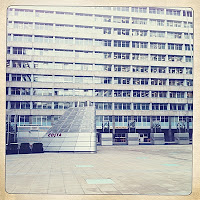 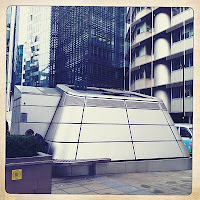