This last two weeks I have officially become intolerant of Superglue.  I am not sure I can take any more Hydroquinone, Ethyl 2-cyanoacrylate, and Polymethyl methacrylate.  I do use adequate ventilation and a quick accelerator spray to minimise exposure but I officially hate the stuff.  I now leave figures on an open window sill to cure, to avoid breathing in the stuff but it is difficult to avoid when actually gluing the models together.
With a Grunts participation game going on the road with the first game at SELWG in October I have accelerated efforts to get the 15mm SCI-FI models ready for the wargame.
I have several existing options for terrain boards to take to the show but I also have a grand plan to produce a major bridge and city terrain piece to act as a demo board. This is not likely to be ready until Reading Warfare in November and even then it is a stretch, I will need to get my foam cutter and glue gun out and ready.
On the table at the moment are a mix of Ground Zero Games (GZG) New Israeli Troops, Kra'vak troopers and a varied mix of specialists for the Grunts games which include Spider Drones, Medic's, Engineers and Drone control units.
The two Roach VTOL's are also now base sprayed, one in troop deploy mode and the other in flight mode.
The other work in progress is a large Mech, which is now at a stage where I am not sure I can be bothered to do any more detailing! So it might get a matte coat after some quick decals are added from Fighting Pirana graphics.
Photos below. 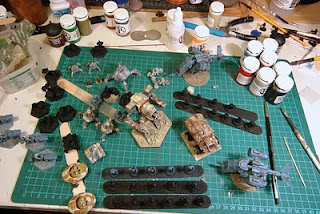 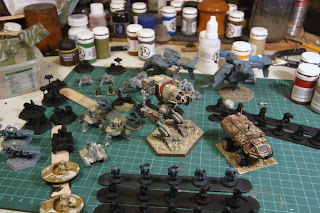 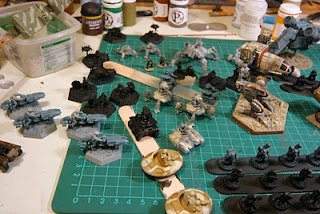 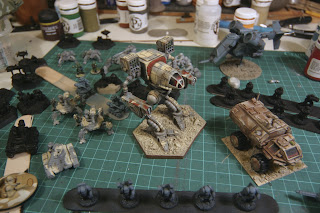