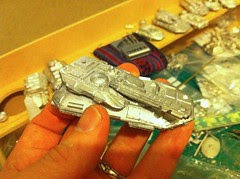 GZG 15mm Heavy Grav Tank
Originally uploaded by inrepose
This tank is in the GZG.com range and is part number V15-18A. The on-line GZG store does not show how nice it looks when fitted with the long barrelled weapon. It weighs a ton and is a four part kit, with under carriage, hull, turret and weapons which glue together neatly.  I will be mounting it on a raised grav base, also from GZG, to give it that just-above-the-ground look.

I picked up two of these 15mm SCI-FI Miniatures at the Colours wargames show at Newbury race course and have kitted one out with the short plasma weapon and this with the Gauss canon.
Posted by inrepose at 23:24