V0.6 of Grunts near to release 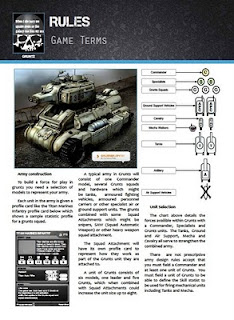 I have been busy again today, back to working on the main rules PDF after the extended break in stat-block XLS land.

About 5 hours complete today on items like layout, which shockingly took hours to tweak! I wanted to change the font to a bolder one which is easier to print and turn off the clunky hyphenation which puts lot-s of thes-e betw-een words. They are now waxed.

I have also tidied up the bunker busting building assault rules, cyber warfare and various other tweaks.  I wanted to insert plenty of sample views on gameplay, so I have developed a set of simple symbols for the various unit types so I can show samples of gameplay e.g. coherency, moves, shooting etc.

These will be "military symbol" style and you will find them throughout the v0.6 rules to be released this week.  Thanks to a friend called AgentofPing I have some great new layout coming through which structures the sections better with a clearer overview at the start of the book a more logical rules structure.   I have not forgotten the need for the Shikhan and other 15mm.co.uk figures in the stat block which will come later.  Also thanks to Mark Ball I have an excellent telepathic ability for Octopods which is in the new release this week.

Some of the new licenced artwork is also going to start appearing in version as a creep toward v1 and I have attached a sample page from the new v0.6 rules which show the new symbols, font and non-hyphenated layout.  No super-print friendly version yet - I am working on how to save the PDF with no artwork for faster printing on home inkjets.

Head over to the yahoo group and sign up for updates. http://uk.groups.yahoo.com/group/gruntz-scifi/
Posted by inrepose at 23:52