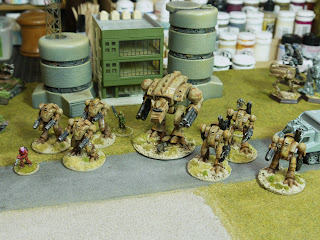 Not many people know this but... The Italians are well known for plastic manufacturing and paints.  In fact that famous Australian pop band of the early nineties "Crowded House" had a song about Italian plastic.  These days almost all of our European designer branded high street glassess frames are made in one or two large factories in Italy. They are also the country where renaissance art kicked off in the 1400C which is when they invented most of the modern colours you see today in artist oil tubes. So you could say they have a great pedigree in plastics and pigments.

Amongst the military modelling community the Life Color range of Italian paints are a popular choice.  These are very fine paints, super matt and come in a nice screw top pot.  Rather than the Vallejo paints which are either acrylic brush or model air type, the Life Color ranges can be used by brush or thinned for airbrushing.   So you if you are thinking of taking the leap into airbrushing, these paints are ideal because you can use them through airbrushes or start with them by hand brushing.

They don't have a classic fantasy range with the usual "Gore Red" or "Skull Socket White", so you have to pick and choose from the basic colour ranges or from the sets which are focused on military periods with Axis / Allies tanks, aircraft and uniforms.  These are very easy to select if you are a Flames of War (FOW) player because you get exactly the paints needed for the vehicles you are painting or airbrushing. For the SCI-FI or Fantasy painter you need to decide on an appropriate set to get started with and they do have a matt starter set in the range with 12 pots.

So why on earth should we bother changing paints? I think we all have favourite paints with various quirky personal reasons why we stick to them. I personally have my set of nail varnishes from 1973 which I mix with spit, boot polish and dirt from the garden.  If I use them by gargling and drooling the results onto the figures they work great (don't look to closely at the result).   However being overtly OCD means I have to try new things and I have heard a lot about how good Lifecolor is,  so I thought I would give them a spin.

Rather than dive in with the full paint sets I first tried the rust kit.  It is called the Dust and Rust diorama set and has 6 colours for about £16. Four of the colours in the set are matt rust colours and two are dusty pigment washes called Tensocrom.  The Tensocrom sets are all about washes and changing the chromatic nature of flat colours which are great for panels on vehicles.  I was not that worried about using the Tensocrom washes but I did want to try the rusts and the kit made it slightly cheaper when buying the full set.

I tried the technique with the paints on some models from Critical Mass Games. The models were first airbrushed with a digital camo style which was detailed in this video tutorial I put together earlier this year.


After airbrushing I used the rust colours from Lifecolor, starting with the light shade in a large area and building up to a darker rust colour in the centre of the rust spots. These were mostly added to the edges or corners of panels, where you might expect some dents or wear and tear.

OK so we could just go and select a reddish brown, orange and yellow from our normal paint sets, why bother with Lifecolor?  Well I was amazed at how good they work.  Having a guide that tells you to use the different colours in a specific sequence helps for quick reference, however they are also very matt and dull which works very well for rust and being a fine very-thin-liquid mix they go on smoothly and cover well.   For a quick interesting result to break up an otherwise simple airbrushing base coat they do a great job. It was a bit like painting liquid rust onto the models.

So if you wanted to try a rust effect or were simply looking for some new paints, I would recommend grabbing a starter and giving them a go. See how you get on with them and then step up to some of the other sets.

If you look very closely at the picture above you may also notice a metal-blue tinge on the weapons. This blue tinge is another Lifecolor paint from the Tensocrom range called Kerosene. It is a very thin wash and very sublte which you can build up in layers (letting it dry first) to add a blue tinge to metal work and was combined with Tensocrom smoke to add the dark shade to the metal work which was a base of Pig Iron from P3 paints.  Using the smoke gave the metal some depth and was very quick to apply, with a little patience needed to let a light wash dry before applying more water like wash into the corners.

You don't have to worry about the Tesocrom washes flooding the base colour, they are so thin and fine which avoids that overload you might find if you simply washed a GW ink over metal work and suddenly realised that all your paint work has been ruined by an over-heavy ink.