Work is speeding along on the Gruntz Army builder for Mac and Windows users.  A free Beta version which allow use of the basic functions will be coming soon.

Features include the ability to drag and drop your own images of models on the card, so you can print your unit cards featuring your own miniatures.  It is still in Alpha stage at the moment but in the coming Month it should be available to download.   Future plans include a port to Ipad and Iphone but initially it will be a Mac and Windows desktop app.

Final feedback is still coming in from Alpha testing which will be reviewed and potentially implemented for the Beta public release.

In the following example you can see how the builder allows you to select the size class and payload for a mecha unit which results in automatic adjustments on the card before printing. 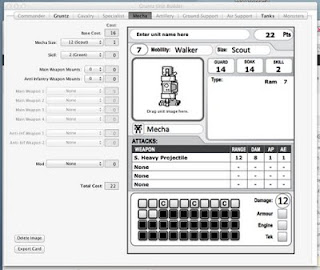