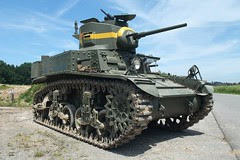 Spotted this sweet looking M3 light tank which was deployed in the second world war from 1941 on. It has been used rarely as a combat tank,and used primarily for reconnaissance.

A very fine looking light tank which would not look out of place as a robot tank in a sci-fi game. I am sure Ground Zero Games (GZG) have something which could be a close match. Chunky!